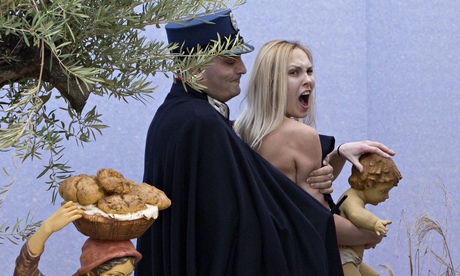 Femen activist who stole baby Jesus in St Peter’s Square in the Vatican is arrested by police officer. Photograph: AP

Iana Aleksandrovna Azhdanova, from Ukraine, was held in a Vatican cell on Friday, awaiting possible trial for “disturbing the peace, obscene acts in a public place, and theft”.

Azhdanova was naked from the waist up as she stormed the nativity scene and had the message “God Is Woman” daubed on her torso while thousands of pilgrims looked on.