Far from keeping the peace, Nato is a threat to it 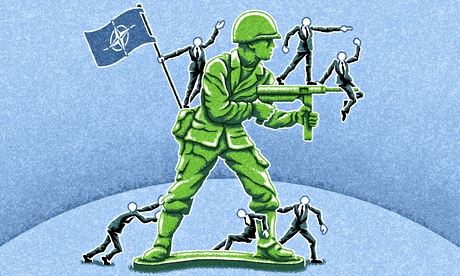 ‘Western powers are resisting the negotiated settlement that is the only way out in Ukraine for fear of seeming weak.‘ Illustration: Matt Kenyon

For the west’s masters of war, it’s a good time to be in Wales. A military alliance that has struggled for years to explain why it still exists has got a packed agenda for its Newport summit.

The summit is planning a rapid reaction force to be deployed across eastern Europe to deter Moscow. Britain is sending troops to Ukraine for exercises. In Washington, Congress hawks are squealing appeasement and demanding action to give Ukraine „a more capable fighting force to resist“ Russia.