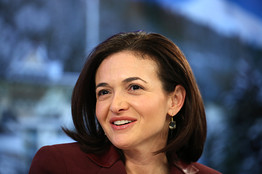 It was the first public comment on the study by a Facebook executive since the furor erupted in social-media circles over the weekend.

“This was part of ongoing research companies do to test different products, and that was what it was; it was poorly communicated,” Sandberg, Facebook’s chief operating officer, said while in New Delhi.  “And for that communication we apologize. We never meant to upset you.”