A right-wing state and corporate push to cut off water is economic shock therapy at its most ruthless and racist, but resistance is growing 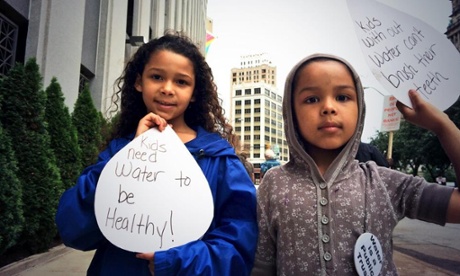 Children in Detroit attending a rally against water shut-offs in the city on June 20, 2014. Photograph: Justin Wedes

[…] Denying water to thousands, as a sweltering summer approaches, might be bad enough in itself. But these shut-offs are no mere exercise in cost-recovery.

The official rationale for the water shut-downs – the Detroit Water Department’s need to recoup millions – collapses on inspection. Detroit’s high-end golf club, the Red Wing’s hockey arena, the Ford football stadium, and more than half of the city’s commercial and industrial users are also owing – a sum totalling $30 million. But no contractors have showed up on their doorstep.

The targetting of Detroit families is about something else. It is a ruthless case of the shock doctrine – the exploitation of natural or unnatural shocks of crisis to push through pro-corporate policies that couldn’t happen in any other circumstance.