In 2007, Adam Parrish created an enormously popular account to tweet the English language a word at a time. He explains why he did it and what he learned 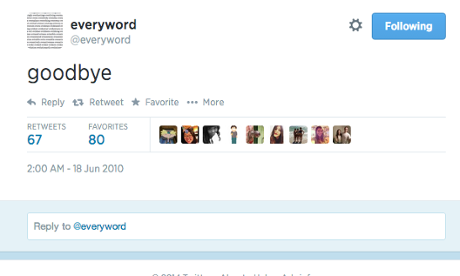 After seven years and 109,000 tweets, @everyword, one of the internet’s most beloved bots, is retiring. In 2007, computer programmer and poet Adam Parrish set out to tweet every word in the English language in alphabetical order, amassing 95,000 followers along the way. On Friday 7 June, the project will finally be complete. To mark the end of an era (and the alphabet), Parrish tells the Guardian what the project has taught him about people and the internet, and why it doesn’t matter that „sex“, „weed“ and „vagina“ are its most popular words.