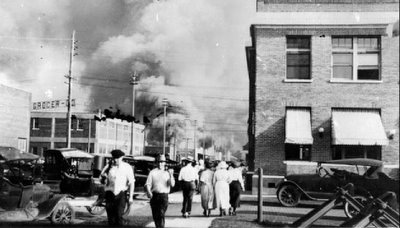 National Guard troops patrolling the streets armed. Thousands of black people held in a convention center. Hundreds of black dead, with bodies piled like wood. That was not New Orleans, that was Tulsa, Oklahoma, in June 1921.

On May 30, 1921 a young black man named Dick Rowland, stumbled into a white woman, while entering an elevator. He was accused of assault, and arrested the next day. Newly rich from oil Tulsa, was a Ku Klux Klan town. Rowland was sentenced to be hanged. The Tulsa Tribune called for a „Negro lynching tonight.“

The white mob was surprised when they were met by several dozen armed black men, dressed in their World War I uniforms. This led to a racist three day destruction of the black neighborhood of Greenwood. The Red Cross reported 300 mostly dead black people.

Greenwood called „Little Africa,“ was a relatively wealthy community. White mobs, many deputized, destroyed every house, store, church or school. The mob met resistance from an armed black population. Governor Robertson declared martial law. The National Guard arrived with machine gun mounted trucks, and airplanes hovering over Greenwood. It was the first time an American city was bombed from the air, by the US government.