CDU and its sister party CSU together gain 35.4% of vote, with the Pirate party and Animal Rights party also gaining seats 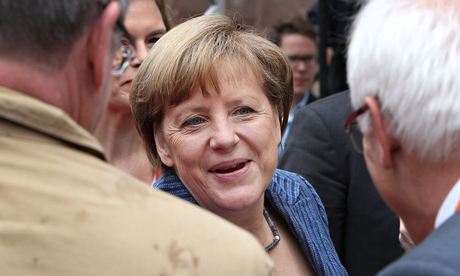 The CDU’s posters and flyers focused almost exclusively on the persona of the German chancellor. Photograph: Daniel Roland/AFP/Getty Images

The party group led by Angela Merkel, below, emerged as the overall winner in Germany, in spite of suffering its worst result in the history of European parliamentary elections. The CDU and Bavarian sister party the CSU together gained 35.4% of the vote, beating into second place the Social Democrats, with 27.2%.