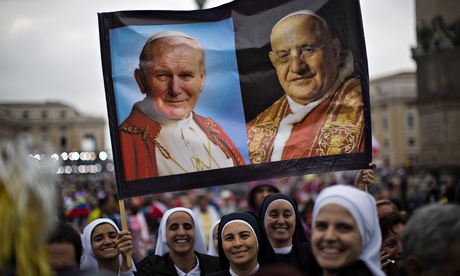 Nuns among the 800,000 pilgrims hold up portraits of Pope John Paul II, left, and Pope John XXIII at the men’s canonisation in Rome. Photo: Emilio Morenatti/AP

It was the first time two popes had been canonised at the same time, and the first time that Francis, elected last March, had celebrated a public mass alongside his predecessor, Pope Emeritus Benedict XVI. Dressed in full vestments, the former pontiff shared two greetings with Francis in front of images of their predecessors hanging on the basilica.