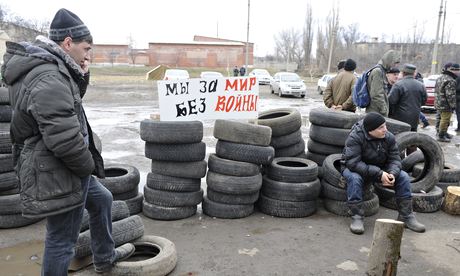 People outside an ammunition depot at Volodarsky mine. The sign reads: ‚We are for a peace/world without war.‘ Photograph: Rogulin Dmitry/Itar-Tass/Corbis

Since March a group of protesters have been guarding the entrance to the Volodarsky salt mine, which holds an underground collection of at least a million firearms ranging from first world war heavy machine guns to Soviet-era Kalashnikovs.

The protesters say they are there to prevent the new government from using the weapons against them, but officials and analysts worry that pro-Russia militias could seize the guns.