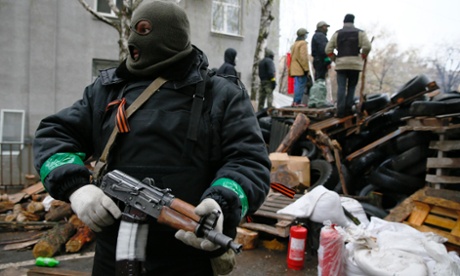 An armed man stands next to a barricade in front of the police headquarters in Slaviansk on Sunday. Photograph: Gleb Garanich/Reuters

Ukrainian security forces have launched an „anti-terrorist“ operation to end the grip of separatists on an eastern town, the country’s interior minister said on Sunday.

As the White House said that vice-president Joe Biden would travel to Kiev on April 22 to show support for the Ukrainian government, residents in the eastern city of Slaviansk have been told to stay indoors in anticipation of clashes between pro-Russian militants who have seized official buildings and Ukrainian security forces.