If you ever connected to the Internet before the 2000s, you probably remember that it made a peculiar sound. But despite becoming so familiar, it remained a mystery for most of us. What do these sounds mean?

(The audio was recorded by William Termini on his iMac G3.)

As many already know, what you’re hearing is often called a handshake, the start of a telephone conversation between two modems. The modems are trying to find a common language and determine the weaknesses of the telephone channel originally meant for human speech.

Below is a spectrogram of the handshake audio. I’ve labeled some signals according to which party transmitted them, and also put a concise explanation below. 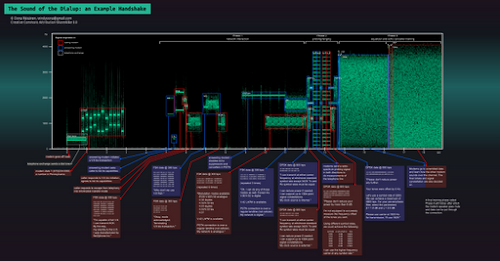