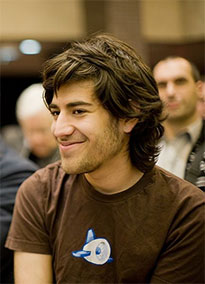 DEAR USERS OF THE INTERNET,

In January 2012 we defeated the SOPA and PIPA censorship legislation with the largest Internet protest in history. A year ago this month one of that movement’s leaders, Aaron Swartz, tragically passed away.

Today we face a different threat, one that undermines the Internet, and the notion that any of us live in a genuinely free society: mass surveillance.

If Aaron were alive, he’d be on the front lines, fighting against a world in which governments observe, collect, and analyze our every digital action.

Now, on the the anniversary of Aaron’s passing, and in celebration of the win against SOPA and PIPA that he helped make possible, we are planning a day of protest against mass surveillance, to take place this February 11th.