Protesters, buskers, preachers, the young: all could end up with ‚ipnas‘. Of course, if you’re rich, you have nothing to fear 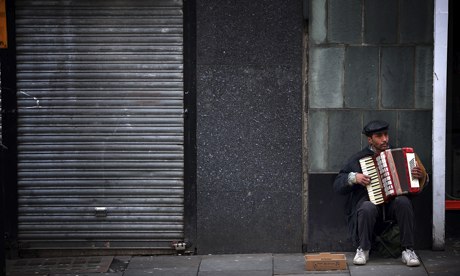 ‚Street life will be reduced to a trance-world of consumerism in which nothing unpredictable or disconcerting happens.‘ Photograph: Christopher Furlong/Getty

On Wednesday the Antisocial Behaviour, Crime and Policing Bill reaches its report stage (close to the end of the process) in the House of Lords. […]

The bill would permit injunctions against anyone of 10 or older who „has engaged or threatens to engage in conduct capable of causing nuisance or annoyance to any person“. It would replace asbos with ipnas (injunctions to prevent nuisance and annoyance), which would not only forbid certain forms of behaviour, but also force the recipient to discharge positive obligations. In other words, they can impose a kind of community service order on people who have committed no crime, which could, the law proposes, remain in force for the rest of their lives.

The bill also introduces public space protection orders, which can prevent either everybody or particular kinds of people from doing certain things in certain places. It creates new dispersal powers, which can be used by the police to exclude people from an area (there is no size limit), whether or not they have done anything wrong.

[…] without committing a crime, you can be imprisoned for up to two years. Children, who cannot currently be detained for contempt of court, will be subject to an inspiring new range of punishments for breaking an ipna, including three months in a young offenders‘ centre.